The Swiss capacity allocation body TVS is a federal not-for-profit public-law entity with a separate legal identity. It is independently organised and run and keeps its own accounts. It is owned by the Swiss federal government and administratively assigned to the Federal Department of the Environment, Transport, Energy and Communications DETEC.

The Swiss railway network is used jointly by more than 40 different rail operators, also known as railway undertakings (RUs). For this to work, for each train, each RU must apply for the right to use the track network for a given time period in a given geographical location. This is called a train path.

A train path (also known as a timetable path) is the entitlement operate a rail service on:

TVS is responsible for the entire Swiss interoperable standard-gauge network and the non-interoperable standard-gauge routes Emmenbrücke – Lenzburg and Zürich-Selnau – Zürich-Giesshübel (branch line). It is not responsible for standard-gauge cross-border routes, which come under different regulations governed by international treaties. This applies specifically to the German and Austrian railways routes on Swiss territories. Separate rules of responsibility laid down in a Guideline issued by the Federal Office of Transport (FOT) apply to keeping the infrastructure register (see section 4).

Railway network under the responsibility of TVS

Standard-gauge routes under the responsibility of TVS

Standard-gauge routes not under the responsibility of TVS

Map Swiss railway network in the responsibility of the TVS

TVS’s tasks are laid down in the bilateral Overland Transport Agreement with the EU. By signing this agreement in 1999, Switzerland undertook to adopt EU Directive 91/440 and to make the necessary changes to the law in this field. When the Overland Transport Agreement came into force in the summer of 2002, the first EU Railway Package and in particular EU Directive 2001/14 came into effect.

The first EU Railway Package is based on the principle that for competition under free network access conditions to function correctly, all market operators must have the same conditions of access. For this reason, with integrated railways having their own railway undertakings (RUs), all the essential functions required for network access are provided by an independent capacity allocation body. These essential functions are train path planning (timetabling) and train path allocation. According to the first EU Railway Package, the setting and collection of the track access charges (train path price) are also functions essential to network access. Because in Switzerland the train path price system is set by the federal government, the Federal Council chose to delegate to TVS only the collection of the track access charges.

TVS does not draw up the timetable itself; it tasks the infrastructure managers (IMs) with drawing up draft timetables. This possibility is expressly provided for in Article 9f of the Railways Act. However, in this task-oriented model, TVS remains responsible for timetable planning and must be able to guarantee at all times that the timetable planning made on its behalf is carried out without discrimination.

Essentially, there are three conceivable ways that conscious or unconscious discrimination can occur in timetabling:

TVS’s business model takes these possibilities into account. TVS plays an active role in all areas in which they might occur, not just during train path ordering but earlier, during preparation of the annual timetable. 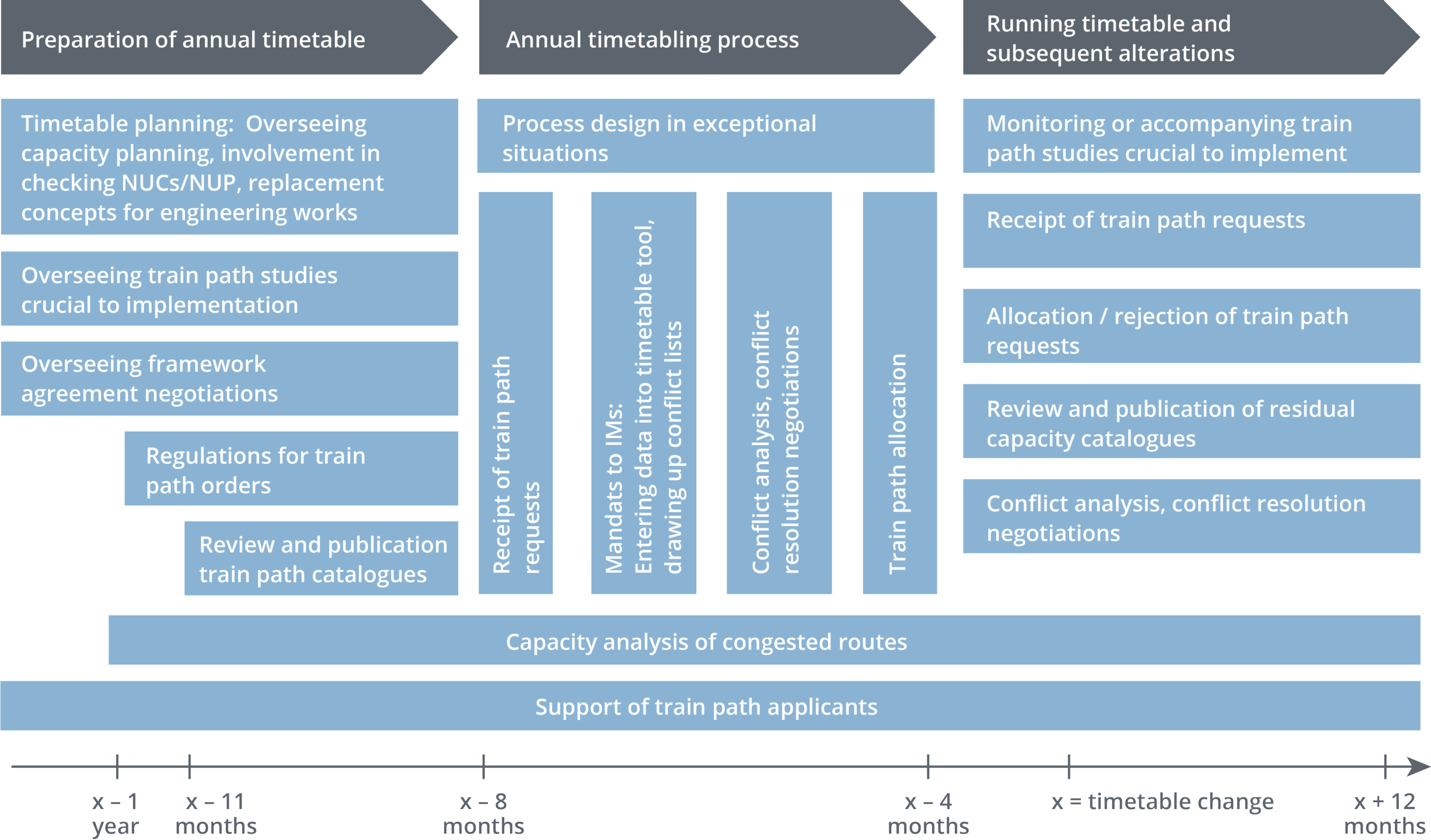 Overseeing train path studies
When freight forwarders or RUs develop new or amended traffic concepts with different time frames, they often have the feasibility of their concepts checked by the timetable planners. If a timetable planner were to unfairly classify a concept as not viable (without the study having been overseen or accompanied by TVS), the train path order would not take place. In this case, TVS would not be in a position to ensure that no discrimination has taken place. That is why TVS oversees all train path studies. It decides independently which studies it monitors or actively accompanies.

IM network access and network usage conditions (Network Statement)
To enable use of the infrastructure networks of the BLS, SBB (including the HBS and STB networks op-erated by SBB) and SOB IMs, TVS determines the rules governing the ordering of train paths and ancillary services. The IMs adopt these rules in their network statements. This is also planned in the medium term for the other IMs under TVS’s responsibility. Currently, the access conditions of these IMs are collected and published in common by the TVS.

Annual timetable: receipt of train path requests, conflict resolution and train path allocation
In the annual timetabling process, TVS is in charge of the coordination and conflict resolution stage. A train path conflict occurs when two or more train path requests clash and cannot be implemented as requested. TVS’s aim is to find alternatives so that all train path requests can be implemented. It therefore requires flexibility from all those involved in the conflict resolution negotiations, regardless of the order of priority. Flexibility is not demanded if it would mean that connections can no longer be guaranteed or transport chains no longer assured.
The alternatives must be commercially attractive to the RUs concerned. It is not enough simply to look for the next available timetable path; the RUs must also be able to run their services efficiently. For this reason, the alternatives apply both to timetable planning and to the RUs’ production concepts. If no mutually acceptable solution to the train path request conflict can be reached, TVS makes the final allocation and rejection decision on the basis of the priority rules.

Capacity analysis for all routes deemed to be congested
If TVS has to decline train path requests for capacity reasons, or if there are indications that this will be the case, on the basis of Article 12a of the Rail Network Access Ordinance (RailNAO) it declares the bot-tleneck route to be congested, analyses the bottleneck situation and draws up measures to alleviate or deal with the bottleneck. It is entitled to declare these measures as binding.

Collection of track access charges
TVS collects the track access charges for basic and ancillary services on behalf of and for the account of each IM. To determine the amounts invoiced, TVS uses the existing IT systems. Each IM is required to record on its system the services run and the ancillary services provided on its network for each individual RU or to make this information available to TVS in another suitable form.
To ensure that there is no discrimination, in addition to generating invoices, TVS also carries out active monitoring by obtaining access to the relevant planning and invoicing systems used by the IMs and supervising the complaints process.

Publication of investment plans
The IMs’ investment plans provide information for at least the next five years about all of their mainte-nance and expansion investment projects and how they are financed. To enable the RUs and connected operators to be included as required, these investment plans must be published. What this means in practice is that the FOT asks TVS to include a link to its database on the home page of the TVS website.

5. How TVS is funded

TVS is a not-for-profit entity. It is funded by the fees paid by the IMs for which it is responsible. These fees cover TVS’s planned net expenditure (operating expenditure minus miscellaneous income), which is approved by the board of directors along with the budget. The level of the fees for the various IMs are calculated and invoiced by TVS in proportion to the train path kilometres allocated to each individual IM on its rail networks. The IMs recoup the resulting operational expenditure through the federal govern-ment’s service level agreement payment framework for infrastructure operation, from the Rail Infrastruc-ture Fund (BIF).